What’s Your Latest ‘Preneur? (A Startup Call to Arms)

The single best line in the movie, The Social Network, was, “Well then, what was your latest ‘preneur?”

This question, and the delivery by actress Dakota Johnson, perfectly captures many’s skepticism of entrepreneurship. This is a view that must be overcome quickly as entrepreneurs are the world’s only hope for job creation, and for the innovation that is needed to solve our biggest problems.

The full scene begins when Napster co-founder Sean Parker (played by Justin Timberlake) wakes up in Stanford co-ed Amy Ritter’s dorm room. They banter to get to know each other.

At the 50-second mark in the above clip: 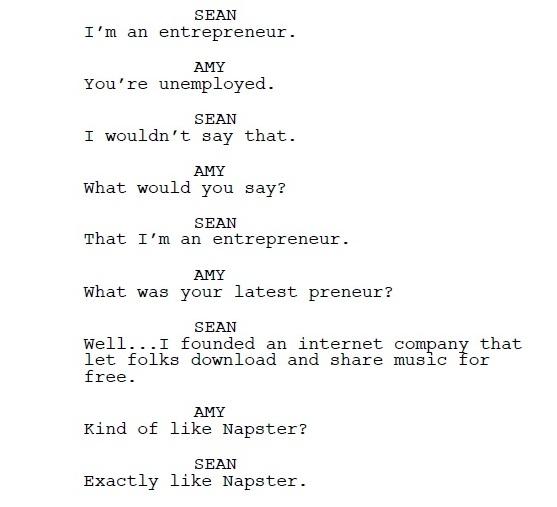 When Sean describes himself as an entrepreneur, Amy reacts flatly, “You’re unemployed.”When he repeats his assertion she playfully challenges him with, “Well then, what was your latest ‘preneur?”

Her character reflects the skepticism of all those who, when they hear the term entrepreneur, think of:

Indeed, describing yourself as an “entrepreneur” sounds pretentious. I should know, I use the term “serial entrepreneur” in my written bio’s. I do it because it’s accurate—I’ve started and sold more than one business—and it’s the most efficient way to get the point across. But I cringe every time I read it, and if I said it out loud I’d feel like a complete ass. Actually, If I said it out loud I’d be a complete ass.

Unfortunately all the negativity may be having some effect. In America, for decades the average number of new ventures each year was 600,000. Recently that number fell to 400,000 per year.

While many have dreams to own their business and to be their own boss, few will ever act on those dreams. For those who do muster the courage to strike out on their own, few new companies will ever take off. Gallup CEO, Jim Clifton, has spent his lifetime studying what makes people tick. In his book, The Coming Jobs War, he estimates that only three in 1,000 people have the potential to build a company with $50 million or more in revenue (i.e., 0.3% of the general population are able to build a sizable company).

The drop in entrepreneurship should be seen as an epidemic without borders that puts the world at risk. It’s time to cast-off all the negative connotations around startups and to fully embrace the reality that entrepreneurs are our modern day superheroes:

Most important, we must recognize that “entrepreneurship” isn’t just a job title.

Entrepreneurship is a mindset, a worldview, a way of life.

The Spartans weren’t just warriors who excelled with spears and shields—to be a Spartan meant a way of life that valued discipline, duty, and endurance. A samurai in Japan, with the “job” of warrior, followed a code (Bushido) with tenets of loyalty, frugality, and honor.

Entrepreneurs don’t begin their training as children and they don’t have an official “code”, but none can deny that there is an entrepreneurial perspective (or is it personality?). Entrepreneurs are risk takers, they are optimists, they thrive against the status quo, they value talent (and talent alone, not who your Daddy was, how rich you are, what school you went to, or even if you have a degree), they don’t even understand what the word failure means (there is only success, or learning), and they want to make a difference—they believe they can make a difference.

So let us celebrate entrepreneurs and entrepreneurship—in all their variations: entrepreneurs, intrapreneurs, solopreneurs, and more. Let us recognize that they are modern day superheroes who are our best hope for a future of prosperity and peace.

So I steal back the question and I ask you loudly with pride, curiosity and camaraderie. I just have to ask, well then,

“What is your latest ‘preneur?”

(I really want to know, leave a comment below).