Performance Appraisals. 4 Reasons Why They Must Be Abolished

(Reprinted from my column on Forbes.com.) 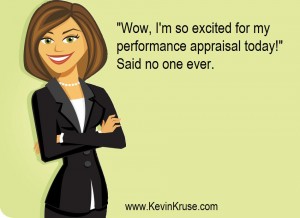 For over two thousand years doctors would puncture their patient’s veins and let them bleed out in order to rid them of their diseases. Today we laugh at the practice of bloodletting.

Two hundred years ago we would measure a person’s skull and use the results to determine if they were smart or if they perhaps had criminal tendencies. Today we laugh at Phrenology.

Now we sit once a year with our talented colleagues and assign them one to five stars across a handful of standards in order to improve their performance. Twenty years from now we’ll laugh at the idea of an “annual performance appraisal.”

Despite my dogged research, the origins of the annual performance review, which emerged after the Second World War are actually unclear. My best guess is that highly trained Soviet spies infiltrated the West disguised as HR leaders, and they implemented annual performance reviews as a way to destroy capitalism. (Note to the humor-challenged: the previous sentence was a joke.)

Here are 4 reasons why the annual performance review—as it’s traditionally practiced—is an evil, toxic ritual that must be abolished.

Don’t misconstrue my attack on the performance review process as an attack on HR. I only hate the corporate vampires who pretend to be HR professionals so they can defend half-century old notions that drain our souls.

I actually love the true HR professional who gets it—the passionate fighter who is focused on maximizing talent and creating workplace super heroes. These HR leaders are our hope. They—and their C-level colleagues—are the ones best suited to battle the status quo and lead us to the Promised Land.

In my next post I’ll give a solution to the performance appraisal process. Hint: do coaches of sports teams wait until the end of the season to give rating scale feedback to their players? (“Hey, Lebron, I’m going to give you a “5” on your jump-shot, but only a “2” on moving the ball around. Keep that in mind next season OK?”)