Even CEOs Want A Pizza Party (Power of Recognition) 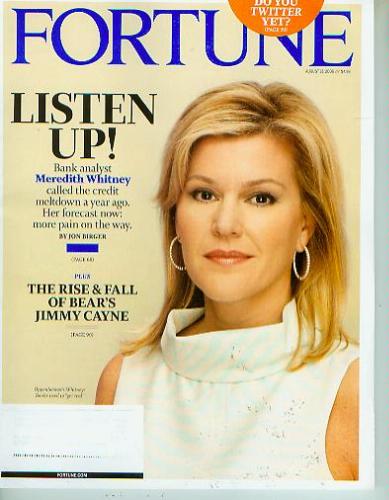 Interesting profile of Meredith Whitney in latest issue of Bloomberg Businessweek showing the power of recognition.

Whitney is an investment analyst who shot to fame when she correctly predicted massive trouble for Citi back in 2007, while she was with a company called CIBC World Markets. She has been named second best stock picker in business and ranked as one of Fortune 500’s “50 Most Powerful Women in Business.”

So with all her success, in 2008 Fortune magazine put her on the cover and wrote a feature about her.

In today’s interview she said about that achievement, “There really wasn’t that much recognition about it at my firm, and that was disappointing to me. Not even a pizza party. I now that sounds silly, but it felt important.”

The following year Whitney would quit her job and start her own company. Today she is CEO of Meredith Whitney Advisory Group.

Never underestimate the power of recognition. Even CEOs want a pizza party now and then.

*** Don’t forget, Kevin Kruse’s new book, Employee Engagement for Everyone: 4 Keys to Happiness and Fulfillment at Work is FREE for Kindle until June 28, 2013.

Kevin Kruse is a NY Times bestselling author and entrepreneur.