Henry Ford and Andrew Mellon Predict the Future, in 1929 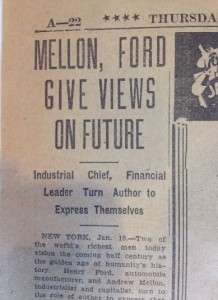 My father recently did some housecleaning and stumbled on an old newspaper clipping, from the year 1929. The headline proclaimed, “Mellon, Ford Give Views on Future.”

Wow, what were the predictions of the two of the world’s richest and most successful men?

It turns out, just months before the Great Depression began, and a decade before the start of World War II, Andrew Mellon and Henry Ford predicted that we were entering into “the golden age of humanity’s history.” Ford also predicted that smoking and tobacco would disappear, and machinery would eliminate all “hard work.”

Closer to the mark, Ford forecast the end of the family farm. He predicted that, “Large corporations, whose sole business it will be to perform the operations of plowing, planting, cultivating and harvesting, will supersede the individual farmer…”

In addition to just being a fun read, my takeaway is that in the short term, nobody can predict the future. These were two super smart, well traveled men who had armies of people to help them understand the market, and yet they couldn’t foresee the complete market breakdown that was looming just months away. And yet, they were also right in the long term, that we the future would be brighter than the past. That is a common thread you see from all super successful people, including Warren Buffet, legendary investor Peter Lynch, and Bill Gates. They might not know what is coming in the next decade, but over the next 50-100 years, the march of progress is inevitable.